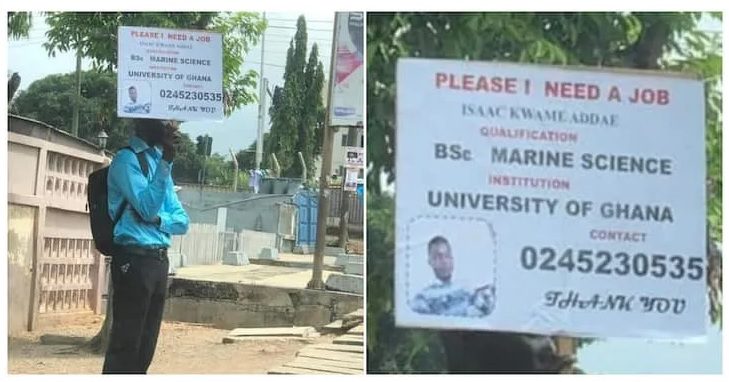 University Graduate Hits the Streets to beg for Employment

The low rate of employment and high standards of living, perhaps have driven a recent University of Ghana graduate to the streets in search of work.

Isaac Kwame Addae has been unable to find work despite earning a marine science degree from the University of Ghana.

Wearing a light blue long-sleeved dress and black backpack, he was seen standing in the street wearing a pair of black trousers and black shoes.

The poster was titled “PLEASE! I NEED A JOB”The poster also included his phone number, which can be used by anyone who has or knows of a job opening.

Shared on social media, it elicited a variety of responses, from those who felt sorry for the young man to those who made light of his predicament.

On the brighter side, the bold and brave decision he took could assure him of getting a job as soon as possible since he has now been noticed by the public where employers and businesses owners who sympathize with him can offer him a job.

As well, there are job vacancies available in Ghana but one has to get informed of the right source for such advertisements. If you don’t want to get lost while searching for work, Click here for Job Vacancy Updates.