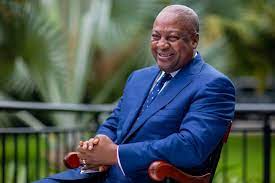 The National Democratic Congress (NDC) has levelled an accusation against the Electoral Commission (EC) of Ghana and the New Patriotic Party (NPP).

National Chairman of the NDC, Samuel Ofosu Ampofo at a press briefing on Tuesday alleged the EC is trying tirelessly to rig the 2024 general elections in favor of the NPP.

The Electoral Commission (EC) has repeatedly pushed for the use of the National Identification Card to be the only document required for voter registration and voter ID card acquisition.

The National Democratic Congress (NDC) reiterates its opposition to this position.

The political party claims that it is unconstitutional to do away with passports and the guarantor system.

He emphasized that if the EC’s plan is carried out, many Ghanaians will be disenfranchised.

“What it means is that, if the C.I. is passed in its current form, it will not only be unconstitutional, it will radically disenfranchise all those prospective voters who for no fault of theirs are unable to obtain the national ID card issued by the NIA. They would have been denied the right provided for them under Article 42 of the 1992 Constitution.”

The party pointed out that the proposed new Constitutional Instrument (CI), which would make the Ghana card the only form of identification accepted for voter ID card registration, would not bode well for Ghana’s electoral system.

The NDC contends that since many Ghanaians lack the card, the measure will essentially disenfranchise thousands.

EC trying to rig 2024 elections for NPP because of new C.I

The yet-to-be-introduced regulation, according to Mr. Ofosu Ampofo, violates the nation’s constitution.