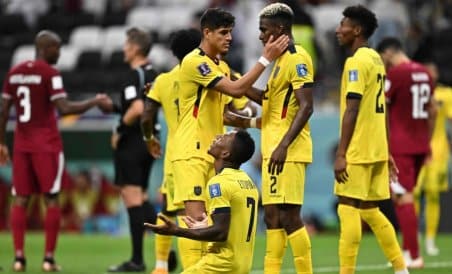 Becomes the first Host Nation to Lose an Opening Game

Qatar on Sunday, November 20, 2022, made history by becoming the first host nation to lose an opening game at the FIFA World Cup.

The FIFA 2022 World Cup host, Qatar, lost their first match to Ecuador in a 2-0 defeat.

At Doha’s Al Bayt Stadium, the home team was defeated by their South American opponents.

No Asian nation has ever won their opening match at the World Cup, and the Qatari team has kept the jinx alive.

Veteran striker Enner Valencia scored twice in the first half to lead Ecuador to a 2-0 victory over Qatar in their opening Group A encounter at the 2022 World Cup. A World Cup history was made for Qatar when the final whistle was blown to end the match, aside the the good names and preparations, they will have to bear the record of becoming the first Host Nation to Lose an Opening Game in the World Cup.

Countries in Group A of the World Cup include the Netherlands and Senegal, as well as Qatar and Ecuador.

Other World Cup Records Made by Qatar

1. The Most Expensive World Cup

By far, the Qatar 2022 World Cup is the most expensive World Cup ever. Qatar may have spent as much as $220 billion in the past 12 years after being selected as World Cup host in late 2010, which is more than 15 times what Russia spent on the 2018 tournament.

2. The First World Cup Held in the Arab World or Middle East

The 2022 World Cup is the first World Cup held in the Arab world or Middle East and the second World Cup staged entirely in Asia, following the 2002 tournament in South Korea and Japan.